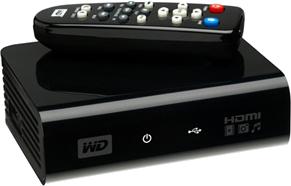 Currently I have all my original DVDs stuffed away in the basement and ripped to my Mediacenter PC in the living room which keeps me from playing DJ. But I’m still looking for a smaller device for bedroom and at my girlfriend’s. Since Philips does not seem to be interested in fixing bugs but rather releases new hardware I’ve started checking out other products, this time Western Digital’s WD TV.

You see, in Germany you can return products purchased over the internet for a complete refund within two weeks no questions asked. Some local retailers try to keep up offering the same return policy which means I can test the player for 14 days and give it back and buy it elsewhere again, repeat. Of course device and packaging have to be in mint condition which is why I carefully open it, don’t remove foil and use my own cables and batteries. Unfortunately the device is flawed as well:

I know, it’s meant to be a HD player and therefore SD material is hardly prioritized, still I don’t get why one of the oldest formats around that any cheapo standalone can playback is not supported. I usually don’t care about menus but having to fast forward through the first three eps of a DVD to watch the last ep is a PITA. Sometimes even this won’t work as VOBs < 30 mins and ISOs < 40 are not recognized (for no technical reason). Apparently I’m not the only one who expected their media center to support old formats as well.

Although 4 months for the first firmware update with so few features seemed like a bad joke, a huge community evolved around the WD TV, just check out AVS Forums,  english and german Wiki, modded firmware (with nice extra features like network support). WD is doing the right thing by listening to the community and trying to make the WD TV a better product. Way to go.

However, the current 1.02.07 firmware still has some serious bugs some of which affect my personal viewing habits like messed up idx/sub subtitle display due to weird palette interpretation. I’ve upped a rar file with some screenshots to demonstrate this effect (right-click, save as, rename to .rar). During my tests I’ve corrected some serious issues in the german UI which I’ve mailed to WD and b-rad.cc who said to implement them. If you don’t want to wait or feel uncomfortable to install B-rad’s modded firmware just to have some proper translations on your screen you can patch the official 1.02.07 firmware like this:

I’ve only corrected the german UI files (ge.po, ge.mo) and adjusted their MD5s, other than that your new wdtv.bin will be identical to the official firmware.  It goes without saying that I don’t take any responsibility in case you brick your WD TV. Done properly you can always flash over the original fimware by adding a higher version number to wdtv.ver.

I really hope WD is gonna put some more effort into this device and not just it’s already planned successor. Until then I’m gonna return my device and wait for positive rewiews on the next firmware update.