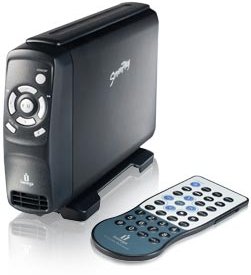 Though I intended to continue with a fax machine I’m bringing forward this one. Cause after 25 days I’ve given up on waiting for a reply by the Iomega online store support to confim the Screenplay having

I know, I know, who in their right mind would buy from Iomega given the way they handled the click-of-death debacle? Still, I saw this in an ad and the guy from the retail chain was kinda cool. When asked about ISO support he admitted to not knowing about it and offered me to refund my money within 10 days after purchase no questions asked.

So after copying over all the TV shows I’d recorded with my DVB-S card I hooked it up to my TV and was satisfied with the prospect of not having to burn those to DVD+RW anymore just to watch them on my own schedule. For my DVD backups I always rip to ISO so I can batch burn with ImgBurn instead of Nero bloatware. So I ripped some of those discs too, after all Iomega went for NTFS instead of FAT32 and so it would certainly play ISOs albeit not specifically mentioned in the product description. But of course it doesn’t and it won’t even after a firmware upgrade as was confirmed on the Iomega support forums. So I’m wondering, why not try to compete on features with other products like the Trekstor moviestation maxi which does support ISO (but comes with it’s own flaw: no Dolby Digital 5.1 output, LOL!).

I just don’t get it why almost every other device out there (MP3 Player, USB stick, multimedia harddrives, you name it) is using FAT(32). Sure having a fast, stable and patent-unencumbered Open Source filesystem that’s not tied to Micros~1 in any way would outweigh the hassle of having to install a driver prior to first use?